Hepatic insulin resistance is a critical component in the development of type 2 diabetes mellitus. In many cases, insulin resistance in liver is associated with reduced expression of both major insulin receptor substrate (IRS) proteins, IRS-1 and IRS-2. To investigate the specific functions of IRS-1 and IRS-2 in regulating liver function in vivo, we developed an adenovirus-mediated RNA interference technique in which short hairpin RNAs (shRNAs) are used to knock down IRS-1, IRS-2, or both, by 70–80% in livers of WT mice. The knockdown of IRS-1 resulted in an upregulation of the gluconeogenic enzymes glucose-6 phosphatase and phosphoenolpyruvate carboxykinase, as well as a marked increase in hepatic nuclear factor–4 α. Decreased IRS-1 was also associated with a decrease in glucokinase expression and a trend toward increased blood glucose, whereas knockdown of IRS-2 resulted in the upregulation of lipogenic enzymes SREBP-1c and fatty acid synthase, as well as increased hepatic lipid accumulation. The concomitant injection of IRS-1 and IRS-2 adenoviral shRNAs resulted in systemic insulin resistance, glucose intolerance, and hepatic steatosis. The alterations in the dual-knockdown mice were associated with defective Akt activation and Foxo1 phosphorylation. Taken together, our results demonstrate that hepatic IRS-1 and IRS-2 have complementary roles in the control of hepatic metabolism, with IRS-1 more closely linked to glucose homeostasis and IRS-2 more closely linked to lipid metabolism. 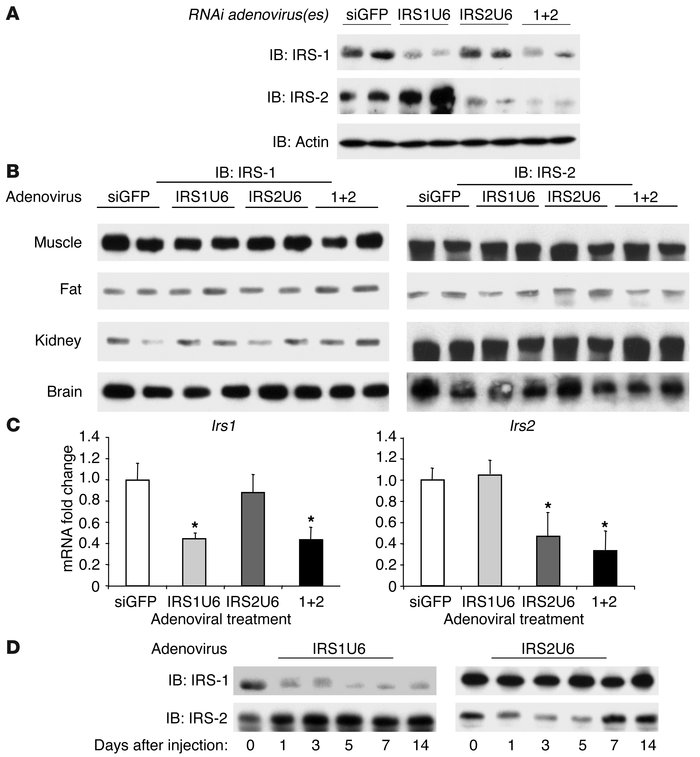 RNAi adenoviruses cause substantial and specific knockdown of IRS-1 and IRS-2 in liver. () Western blots for IRS-1, IRS-2, and actin in liver lysates from mice treated with siGFP, IRS1U6, IRS2U6, or both IRS1U6 and IRS2U6 (1+2). Livers were collected from mice after an overnight fast, and proteins were extracted and processed as described in Methods. Each lane represents liver lysates from a different mouse. () Muscle, fat, kidney, and brain lysates of the mice represented in were subjected to immunoblots for IRS-1 and IRS-2. () Quantitative RT-PCR analysis of IRS-1 and IRS-2 mRNA levels in livers 5 days after treatment with siGFP, IRS1U6, IRS2U6, or both viruses simultaneously ( = 6). Total RNA was extracted from livers and made into cDNA, and primers specific to IRS-1 and IRS-2 were used to determine levels of expression, as described previously (). () Time course of effect of RNAi adenovirus. Liver lysates were made from mice 1, 3, 5, 7, or 14 days after viral injection and blotted for IRS-1 and IRS-2 proteins levels. Day 0 liver lysates were obtained from age-matched mice injected with saline. These results are representative of 3 independent experiments.