AIRE deficiency in thymus of 2 patients with Omenn syndrome

AIRE deficiency in thymus of 2 patients with Omenn syndrome

Omenn syndrome is a severe primary immunodeficiency with putative autoimmune manifestations of the skin and gastrointestinal tract. The disease is caused by hypomorphic mutations in recombination-activating genes that impair but do not abolish the process of VDJ recombination, leading to the generation of autoreactive T cells with a highly restricted receptor repertoire. Loss of central tolerance in genetically determined autoimmune diseases, e.g., autoimmune polyendocrinopathy-candidiasis-ectodermal dystrophy, is associated with defective expression by medullary thymic epithelial cells of AIRE, the transcription activator that induces thymic expression of tissue-specific antigens. Analysis of AIRE expression in the thymi of 2 Omenn syndrome patients and 1 SCID patient, by real-time RT-PCR and immunohistochemistry, demonstrated a profound reduction in the levels of AIRE mRNA and protein in patients as compared with a normal control subject. Lack of AIRE was associated with normal or even increased levels of keratin and lymphotoxin-β receptor mRNAs, while mRNAs of the self-antigens insulin, cytochrome P450 1a2, and fatty acid–binding protein were undetectable in thymi from immunodeficiency patients. These results demonstrate that deficiency of AIRE expression is observed in severe immunodeficiencies characterized by abnormal T cell development and suggest that in Omenn syndrome, the few residual T cell clones that develop may escape negative selection and thereafter expand in the periphery, causing massive autoimmune reactions. 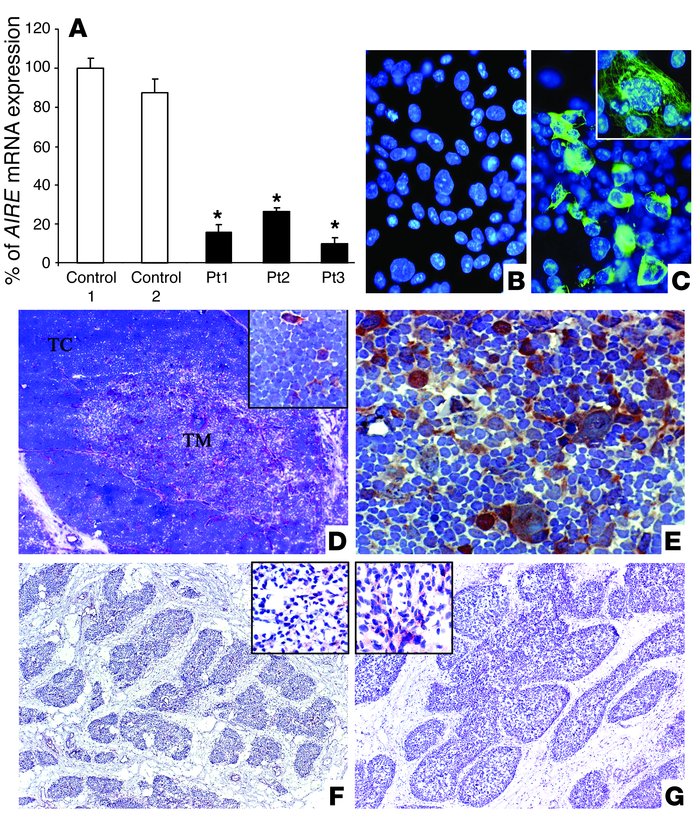 AIRE expression in thymi from Omenn syndrome and SCID patients. () Real-time PCR analysis of cDNA prepared from RNA isolated from normal thymi and from thymi of Omenn syndrome patients (Pt1 and Pt2) and 1 SCID patient (Pt3). The levels of mRNA were calculated as a percentage of those in normal thymus from control subject 1 and are expressed as average of triplicates ± SE. Data are representative of 1 of 5 experiments. * < 0.05 compared with controls. (–) AIRE protein was detectable in AIRE-transfected cells () with the typical cytoplasmic microtubular pattern and multiple nuclear dots (, inset), but not in mock-transfected cells (). In normal thymus, a clear corticomedullary differentiation with numerous thymocytes was identified (). AIRE protein was predominantly expressed in the medulla (TM), whereas only scattered positive cells with large and irregular morphology (, inset) were found in the cortex (TC). A high magnification of the thymic medulla illustrates cytoplasmic and nuclear expression of AIRE by numerous large irregular cells (). Thymus sections from a SCID patient () and an Omenn syndrome patient () showed lymphoid depletion along with loss of corticomedullary differentiation and lack of AIRE protein expression ( and , and insets). AIRE protein was detected by immunofluorescence (green fluorescence in and ) and by immunoperoxidase technique and counterstaining with Mayer’s hematoxylin (–). Magnifications: ×100 (, , and ); ×200 (, , and , insets); ×400 (, , and ); ×1,000 (, inset).