B cell chronic lymphocytic leukemia (B-CLL) is a neoplastic disorder characterized by accumulation of B lymphocytes due to uncontrolled growth and resistance to apoptosis. Analysis of B cells freshly isolated from 40 patients with chronic lymphocytic leukemia demonstrated that the Src kinase Lyn, the switch molecule that couples the B cell receptor to downstream signaling, displays anomalous properties. Lyn is remarkably overexpressed at the protein level in leukemic cells as compared with normal B lymphocytes, with a substantial aliquot of the kinase anomalously present in the cytosol. Whereas in normal B lymphocytes Lyn activation is dependent on B cell–receptor stimulation, in resting malignant cells, the constitutive activity of the kinase accounts for high basal protein tyrosine phosphorylation and low responsiveness to IgM ligation. Addition of the Lyn inhibitors PP2 and SU6656 to leukemic cell cultures restores cell apoptosis, and treatment of malignant cells with drugs that induce cell apoptosis decreases both activity and amount of the tyrosine kinase. These findings suggest a direct correlation between high basal Lyn activity and defects in the induction of apoptosis in leukemic cells. They also support a critical role for Lyn in B-CLL pathogenesis and identify this tyrosine kinase as a potential therapeutic target. 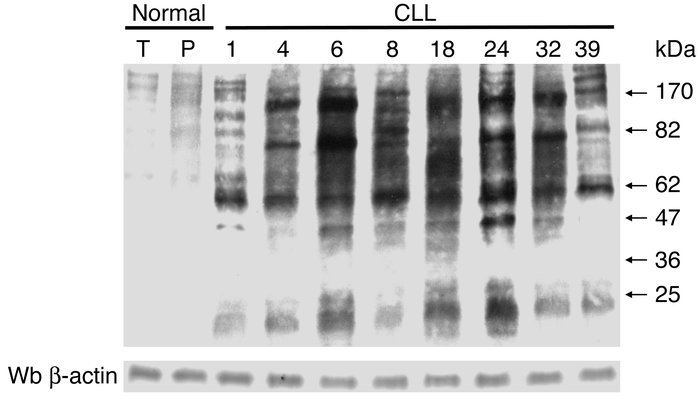 Analysis of protein tyrosine phosphorylation in normal and CLL B cells. Immunoblot analysis of cellular tyrosine-phosphorylated proteins in normal B cells, from both tonsil (T) and peripheral blood (P), and in leukemic B-CLL cells. Cells were lysed, and the proteins were analyzed by Western blotting (Wb) and immunostaining with antibody against phosphorylated tyrosine. The filter was reprobed with anti–β-actin antibody as loading control. The molecular mass of protein standards is indicated on the right. The data are representative of experiments performed with 3 different tonsils, 5 peripheral blood samples, and 40 B-CLL samples.